Why Am I the Only One Weeping in Washington?

I was in Washington, DC this week, doing some work with fundraising colleagues. I spent a little time in the Holocaust Museum.

A survivor was signing books about some of her experiences; I couldn’t introduce myself to her. I was already crying uncontrollably. The museum is designed so that the main hall into which one enters   looks like a railroad station. It is steel and glass and cement and provocative in its simplicity.

Etched into a black granite wall is a verse from the book of Isaiah: YOU ARE MY WITNESSES.

It is haunting. It is taunting.

And is being a witness enough or are we called to do more? To speak more? To ask for more of ourselves and of others?

I am working with some amazing people to end human trafficking.

Our work is basically the same work as that of the resistance in World War II: we are working to release prisoners who are in bondage due to their gender or socioeconomic status.

We will not  accept or tolerate the genocide of vulnerable women and of children. 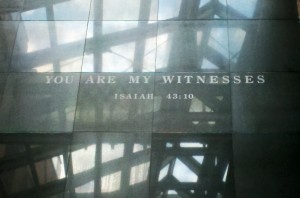 We are gathering people to talk about the issue, to pray for those who are being used and killed and manipulated and abused and harmed, to sponsor children so they can receive an education and be free to be a child,and to sponsor positions in a safe house so women can be taken out of the sex trafficking slavery and given hope and rest and food and medical treatment.

Later I opened my email and here are the quotations of encouragement that offered me hope:

At first dreams seem impossible, then improbable, then inevitable.

so that we do not have to look away when we see it in the eyes of another.
`Scott Morrison

Today, I pray for courage to persist. If there has to be pain,

let me accept it now, get on with it, and through with it.

~Days of Healing, Days of Joy

be bold. be brave. be hope.

View all posts by Annie →

← Hot Dogs, a Hug and Hope
From the US Holocaust Museum →

Annie Fritschner - Speech Highlights from the Athena Awards 2014 from Amplified Media on Vimeo.