Stunned and nearly speechless, the Rev. Annie Fritschner felt a flood of emotions sweep through her as she accepted the 2013 ATHENA International Award for Henderson County.

“This is extremely, extremely personal and meaningful to me,” Annie told the crowd of predominantly women who had packed Kenmure Country Club’s ballroom to capacity last May.

At a young age, Annie began volunteering at soup kitchens in Kentucky, where she developed a heart for philanthropy. Her passion for helping others jump started. “Volunteering saved my life – or at least my soul,” Annie recalls. “I was a miserable student all through grade school and high school and the harder I worked and the more I studied, the worse my grades were. Helping others made me feel valuable. I learned the absolute joy that comes from giving.”

Here’s how one woman who received Annie’s help describes her: “Annie genuinely cares about the struggling, the sick, the poor, and the underprivileged. She unselfishly wants others, especially women, to succeed in their business endeavors, and she uses her God given gifts to help others on their individual paths. She doesn’t just talk about making changes, but is the person who leads others on the path to change. Whether she is preaching from the pulpit, helping businesses raise funds, tending to the sick, counseling the poor or feeding the hungry, Annie does so with humility, sincerity and grace.”

Annie who works part-time as an associate pastor at First United Methodist Church of Hendersonville, has thought a great deal about the ATHENA Award and how she can continue to honor its intent. For years she has struggled with viewing herself as a coward or a chicken, all the while following her heart. Coeur, she notes, is the French word for heart.

“Courageous acts are the value with which I most resonate — but courage really just means leading with your heart,” Annie says. “So courage is the action of living from one’s heart. That I can do. But face a bully? No way. Step in front of the guns? Definitely no way. Stand up for myself and others who are being beaten and humiliated and told they are worthless? That is where things are changing for me.”

After months of prayer and reflection, Annie has decided it’s time to take a more public stand on domestic violence. She wants to be brave and share her own story in hopes of helping others. Winning the ATHENA Award, she says, helped her find the courage.

“I was a child victim of domestic violence. My father hurt me physically and although this isn’t normal, it was what I grew up with and learned how not to discuss,” Annie says. “I was sexually molested when I was young and my family and I never talked about it. Not that night, not the next day, never. Because maybe if we didn’t talk about it, it wouldn’t be real.”

“The ATHENA Award means a great deal to me because receiving it means it is time for me to talk about what some people don’t want to hear,” Annie says. “And I want to talk about these things to help other people talk about their truths.” 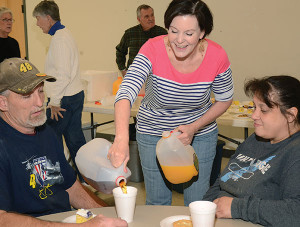 By definition, philanthropy simply means the love of human beings, Annie says. Some days, each of us may be the only hope someone else encounters. She adds, “To truly be effective in our philanthropy, we need to be hope, believe in hope and live hopeful lives.”

Sharing her story of abuse and the journey that’s led her to share those painful truths will take courage. Annie knows some people won’t like her for sharing her story. She knows the consequences may include some detractors who speak badly about her and behave unkindly toward her family. Annie will share her story at this year’s ATHENA Award luncheon on May 22 at Kenmure Country Club.

“The consequences of my speaking up and out are beyond my control; people will do and say and feel what they want,” Annie says. “Silence won’t work for me anymore. It is time for me to be courageous enough to tell my story so that others can feel less afraid to tell theirs. Let’s be bold together.”

Do you know someone from Henderson County who is a high achiever, leader and mentor for women? If you do, now’s your chance to nominate her for the 2014 ATHENA Leadership Award in Henderson County.

Nominees for the prestigious ATHENA Award need to have met these criteria:

The winner of the 7th Annual Henderson County ATHENA Award will be revealed at the Henderson County Chamber of Commerce’s Professional Women’s Luncheon at Kenmure Country Club on May 22. The keynote speaker is the Rev. Annie Fritschner, the 2013 Henderson County ATHENA Award winner. Fritschner is a fundraising trainer, coach, motivational speaker, ordained Deacon of the Episcopal Church, minister, mentor, international advocate working to stop human trafficking in India, and published author who owns her own company, Raising Funds Effectively. She is one of only 100 Advanced Certified Fundraising Executives in the world.

ATHENA Leadership Award recipients come from all professional sectors. The award’s rich history, international scope and emphasis on mentorship make this award among the most prestigious leadership awards one can receive. Past Henderson County ATHENA Award winners include:

This year’s event is sponsored by Morris Broadband, Judy Stroud/State Farm Insurance and facilitated by the Henderson County Chamber, a licensed ATHENA host organization. To nominate someone for the ATHENA Award, please download an application from the Henderson County Chamber’s website: hendersoncountychamber.org. Deadline to nominate someone for this year’s Athena Award is April 18, 2014.

View all posts by Annie →

Annie Fritschner - Speech Highlights from the Athena Awards 2014 from Amplified Media on Vimeo.